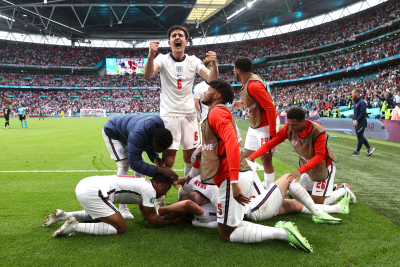 England struck twice late on to end a 55-year wait for a knockout tie victory over Germany amid scenes of huge tension and elation to reach the Euro 2020 quarter-finals at Wembley.

Gareth Southgate's side battled hard to earn the statement victory that has so often eluded England, and it was their talisman of this tournament, Raheem Sterling, who made the decisive breakthrough.

Sterling, who scored the winners against Croatia and the Czech Republic in the group stage, steered in Luke Shaw's cross after 75 minutes to send England's fans, with more than 40,000 inside Wembley, into wild celebrations.

The win was secured with another moment of significance four minutes from time when captain Harry Kane, who had once again struggled to influence the game, headed in from substitute Jack Grealish's perfect delivery for his first goal of Euro 2020.

England were once again thankful for the brilliance of Everton goalkeeper Jordan Pickford, who has yet to concede a goal in the tournament and saved crucially from Timo Werner and Kai Havertz in each half, while Thomas Muller missed a glorious chance to equalise before Kane struck.

It was redemption for the manager, too, with Southgate striking a blow against the side he missed the vital penalty against at Euro 96. His focus will now be on claiming the title, which England came so close to 25 years ago.

Their next step on that journey will be in Rome against Sweden or Ukraine - and after recording a victory which will be remembered for years to come, they will go to Italy full of belief.

Twitter
More in this category: « Roger Federer advances to 2nd round after Adrian Mannarino retires due to injury. Knowledge Musona pens a deal with Saudi Arabian side Al-Tai FC. »
back to top