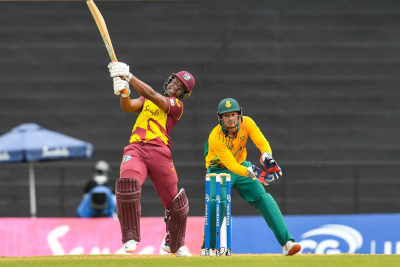 The Proteas held their nerve to beat the West Indies by a single run in the nail-biting third T20 and take a 2-1 series lead.

The next fixture is scheduled to take place on Thursday, 1 July.

Tabraiz Shamsi was the pick of the bowlers and once again the game changer with his 2/13 in four overs – his most economical T20 international figures so far.He ensured that the home team’s over rate was not allowed to run away from them, as they went about the task of defending their total of 167/8 after once again being put in to bat first.

Anrich Nortje was also impressive in his second spell, returning final figures of 2/29. Lungi Ngidi, Kagiso Rabada and George Linde chipped in with a wicket each as the Windies were restricted to 166/7 in their allotted overs.

Earlier in the match and playing on a new strip, Quinton de Kock once again powered the team to a good start, blasting 72 runs from 51 deliveries (5x4s, 2x6s) on the occasion of his 50th T20 appearance for South Africa.

His 42-run opening stand with Reeza Hendricks (17) did not survive the power play, but there was enough on the board not to hit panic stations when the latter was dismissed by Obed McCoy (4/22) for 17 (11) at the start of the fifth over.

McCoy struck again at the end of the same over, dismissing the visiting captain, Temba Bavuma, for one and leaving South Africa on 44/2 after seven. Aiden Markram made good on his first appearance of the series, hitting 23 off 18 and reigniting the Proteas’ engines, but it was a short-lived burst because he was removed by Dwayne Bravo in the 10th over.

The middle order once again failed to add runs to the board, but Rassie van der Dussen contributed a crucial 32 to get the team to the face-saving, 160-plus mark. The team ended with one more run than they posted in their previous match.

Bravo was the only other West Indian bowler to contribute to the wickets column, proving the value of his experience with his three for 25.