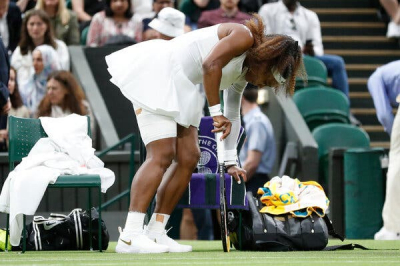 Canadian fifth seed Bianca Andreescu suffered a first-round defeat in straight sets at Wimbledon as she was dominated by France's Alize Cornet.

World number 58 Cornet produced an impressive display to record a 6-2 6-1 victory over the 2019 US Open champion.

Cornet will meet Australian Ajla Tomljanovic or Belgian qualifier Greet Minnen in the second round.

The 21-year-old Andreescu's only other main-draw appearance at Wimbledon was a first-round exit in 2017.

Cornet is contesting her 14th successive tournament at Wimbledon but she had not made it past the first round since 2016.

The 31-year-old went a double break up against an increasingly frustrated opponent and also survived two break points on her way to serving out the opening set.

There was to be no way back for world number seven Andreescu, who stunned Serena Williams to win her first Grand Slam title in 2019, as Cornet established a 4-0 advantage with another double break at the start of the second.

The Frenchwoman saved three break points to hold for 5-1, before capping a superb performance with a stunning lob on her first match point.

Andreescu pulled out of the 2020 French Open last September to focus on recovering from a knee injury, which had kept her out of the Australian Open earlier in the year, to focus on a busy 2021.

However, she has also exited the French Open in the first round and Australian Open in the second round so far this year.

Norrie is seeded for the first time at a Grand Slam after a fine 2021.

The 25-year-old reached the Queen's final last weekend and showed his confidence again on the SW19 grass.

Meanwhile Wimbledon says its courts are "as good as they have always been" in response to mounting criticism as players continued to suffer falls on Wednesday.

Australian Nick Kyrgios said the courts were a "joke" and too slow.

Former British number one Tim Henman, a member of the All England Club [AELTC] board, told the BBC: "It's about controlling the controllables."

He added: "In terms of the preparation of the surface - the science and the readings - we have all that data.

"Wimbledon will leave no stone unturned and we hope there will be no more injuries. The courts are as good as they have always been."

Frenchman Mannarino led Roger Federer 6-4 6-7 (3-7) 3-6 4-2 when he was forced to retire through injury, with Federer suggesting the surface had become "more slippery under the roof" which was closed for large parts of the first two days at the Championships because of rain.

World number one Novak Djokovic said he did not recall "falling this many times on court" after taking several tumbles in his opener against Britain's Jack Draper on Monday, and he suffered more slips during his second-round match against Kevin Anderson on Centre Court on Wednesday.

Earlier on day three, John Isner suffered a nasty fall during his match against Yoshihito Nishioka on court 18 but was able to continue, while Canadian fifth seed Bianca Andreescu slipped on several occasions during her first-round defeat by Alize Cornet.

"I didn't slip just once. I slipped like six times during the match," Andreescu said. "I felt my ankle a little bit, just for like two, three points but then it went away. It was fine.

"The courts are super slippery. I have only played here once before, but the courts weren't like this at all. I spoke to a couple of other players and they said it's not that normal, but this is something we can't really control."

More in this category: « Tabraiz Shamsi shines as Proteas edge Windies by a run to go 2-1 up in the series. Sunshine Tour's De Jager qualifies for his first Major. »
back to top