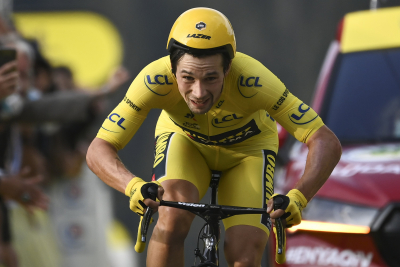 The Slovenian's stunning ride saw him put more time into his rivals and almost claim the overall race lead.

But Van der Poel produced a defiant effort to finish fifth and he is now eight seconds ahead of Pogacar.

The day saw young Dane, Mikkel Bjerg (UAE Team Emirates) lead for most of the day as he went off very early and held onto the lead of the race until Mattia Cattaneo (Deceuninck - Quick-Step) came through.

That didn't last long with Stefan Küng (Groupama-FDJ) smashing the lead time from Cattaneo, putting 36 seconds into him. Pogačar was the dominant force in the end though by 19 seconds

Twitter
More in this category: « Sunshine Tour's De Jager qualifies for his first Major. Confirmed:Everton appoint Rafael Benitez as manager. »
back to top