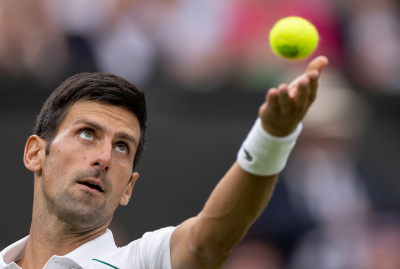 World number one Novak Djokovic brushed aside Kevin Anderson in straight sets to reach the third round at Wimbledon.

The defending champion, chasing his sixth Wimbledon title and record-equalling 20th Grand Slam, won 6-3 6-3 6-3 on a Centre Court surface that continues to cause problems underfoot.

Djokovic will play Andreas Seppi or qualifier Denis Kudla next.

"Kevin is a terrific player, very dangerous on grass courts, fast courts," he said. "Obviously a straight-set victory today but still only one break in each set was enough. I held my serve really comfortably.

"Once we get into the rally, I have a better chance. That was one of the tactical goals - try to make the least unforced errors as possible. I knew Kevin was going to serve big and I wasn't going to have too many chances to break his serve. I've done much better than I thought I would do.

"I believed in myself but it was an almost flawless performance today."

Djokovic is one of the first to reach the third round with the tournament still playing catch-up with first-round matches because of the rain-affected opening days.

It was the fourth SW19 meeting between Djokovic and South African Anderson, their last coming in the 2018 final with Djokovic also winning in three sets on that occasion.

The big-serving Anderson - who had knee surgery in 2020 - never seemed to pose a challenge, his performance littered with errors and not once forcing a break point, only salvaging half of those he faced in a dominant display from his opponent.

The biggest issue for Djokovic was the grass.

Centre Court caused problems on Tuesday with tournament-ending injuries for Serena Williams and Adrian Mannarino after slips, and those troubles continued into Wednesday.