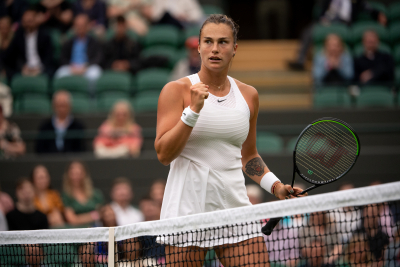 World number one Ashleigh Barty ground out a second-round win over Anna Blinkova as the Wimbledon draw opened up further for her with the exit of third seed Elina Svitolina.

She has reached the Wimbledon third round for the third successive tournament and will play Czech Katerina Siniakova.

But Ukraine's Svitolina is out, beaten 6-3 6-4 by Magda Linette.

Barty was broken twice in an opening set in which she made five double faults, but she fought back to win four games in a row at the end of the first set and into the second.

While her serve did not improve, her attacking prowess powered her through, despite more unforced errors allowing Blinkova to break once again.

But Barty's movement allowed her to take control, clinching another break on the backhand before navigating an eight-minute game to hold.

She broke Blinkova again on the Russian's final service game to win but was full of praise for her opponent.

"We had to do a lot of homework to try to figure out her game," said Barty. "She played a great match today - a few points here and there and it could have been a different story.

"I'm happy to be able to get through and get another opportunity to play."

Meanwhile Ukraine's Elina Svitolina became the latest women's singles seed to suffer an early exit at Wimbledon as the 2019 semi-finalist was beaten in straight sets by Poland's Magda Linette.

Third seed Svitolina, 26, who lost to eventual champion Simona Halep in the semi-finals two years ago, was beaten 6-3 6-4 in her second-round match.

Elsewhere German fourth seed Alexander Zverev reached the third round at Wimbledon with a straight-set victory over American Tennys Sandgren.The 24-year-old world number six produced a dominant display to progress 7-5 6-2 6-3 at the All England Club.

The 2020 US Open finalist will play the winner of the all-American meeting between Taylor Fritz and Steve Johnson.Also on day four, Russian second seed Daniil Medvedev meets Carlos Alcaraz Garfia.Italian seventh seed Matteo Berrettini overcame Dutchman Botic van de Zandschulp in straight sets, taking a third-set tie-break with a deft volley at the net to seal a 6-3 6-4 7-6 (7-4) win and set up a third-round meeting with Slovenia's Aljaz Bedene.