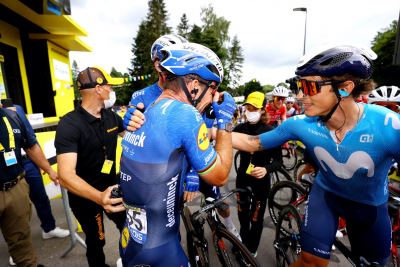 It is the second stage win of this year's Tour for Cavendish, who feared he would never return to the race after a long illness threatened his career.

He was only called into into the Deceuninck-QuickStep team at the last minute for the injured Sam Bennett.

But on stage six he again out-sprinted the peloton to win in style.

In the long final straight to the line in Chateauroux he was well-positioned by his lead-out train before hopping onto the wheel of the fast-finishing Alpecin-Fenix duo of Tim Merlier and Jasper Philpsen.

He then accelerated to pull clear of Philipsen and Nacer Bouhanni.

It is the third time he has won in Chateauroux, including his first ever Tour win in 2008 and again in 2011.

Twitter
More in this category: « Ashleigh Barty beats Anna Blinkova to reach third round at Wimbledon. Federer recovers from shaky start to power past Gasquet and set up mouth-watering clash with Norrie. »
back to top