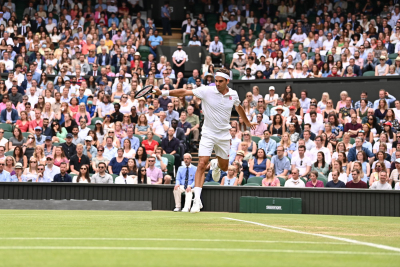 Norrie reached the last 32 for the first time with a 6-3 6-1 6-2 win against Australian wildcard Alex Bolt.

"I hope the crowd gets into it," said sixth seed Federer on facing Norrie.

"I understand if they cheer for him and if it is for me it is because of the last 20 years and all the big wins I've had here.

"Cam is a good guy, he's had a wonderful year and played great at Queen's, backing that up here."

Then the Swiss quipped: "But enough now - he needs to go out! I need to go through."

Norrie, 25, has been one of the leading players on the ATP Tour this year, demonstrating his form and ability earlier on Thursday in front of an impressed home crowd on Court One.

The 29th seed lost the first three games against Bolt before winning 11 in a row to turn around the contest.

Norrie broke twice more in the final set and was given a standing ovation after clinching victory.

Whether serious or not, Norrie did not get his wish but looks sure to give Federer a tough test on Saturday.

The smiling Briton added: "If there is a time to play Roger, I guess now is the best - but he is still a decent player!"

Federer struggled in his opening match against Adrian Mannarino, avoiding a huge upset as injury robbed the Frenchman of the chance to earn a memorable win.

There have been doubts about Federer's own form and fitness.

After two knee surgeries, Federer made his Grand Slam return after a 16-month absence at last month's French Open but pulled out before his last-16 match to "protect his body".