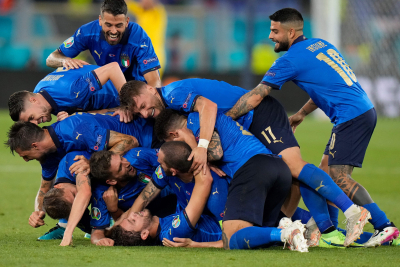 Italy defeated Belgium 2-1 to reach the Euro 2020 semifinals thanks to first-half goals from Nicolo Barella and Lorenzo Insigne.

Italy will now face Spain for a chance to reach the final at Wembley.

Barella's fantastic strike in the 31st minute put the Italians ahead, with Isigne doubling the lead in the 44th minute.

Romelu Lukaku pulled one back for the Belgians with seconds before half-time.

Italy have suffered a major blow after Leonardo Spinazzola, one of their biggest stars in Euro 2020, went off on a stretcher.

The wing-back was chasing down a long ball with 15 minutes to play in the Euro 2020 quarter-final when he pulled up and immediately signalled for a substitution.

After receiving treatment on the pitch, Spinazzola had to be loaded onto a stretcher and carried off the pitch.

A scintillating second half saw both sides with chances to add to the score sheet, but it was the Italians who held on for the win.

Twitter
More in this category: « Six-try Springboks shake off rustiness to breeze past Lelos. Former boxing world champ Lehlohonolo Ledwaba succumbs to Covid-19 »
back to top