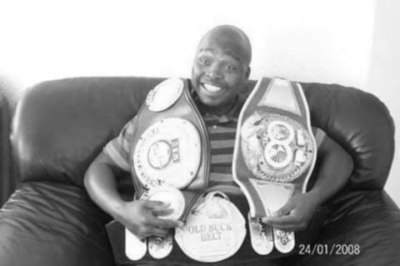 One of South Africa’s most talented fighters, Lehlohonolo "Hands of Stone" Ledwaba, who won a South African title and world titles in three different weights has died from Covid-19 related complications.

Ledwaba made his pro debut on 31 October 1990 at Eldorado Park and scored a fourth-round technical knockout over Ephraim Madi.

He remained unbeaten in his next six fights before winning the Transvaal junior featherweight title with a fourth-round knockout against Vusi Khoza.

In 1993, winning against Derek Vijam (ko 1), Moses Pietersen (tko 3) and in a return against Khoza (tko 4) he was upset by Joseph Ramaswe who stopped him in the second round, before finishing the year with a win over Elias Sebesho.

Winning his next two fights in 1993, Ledwaba was in outstanding form in January 1995 when he scored an eighth-round technical knockout win over Ncedile Siko for the vacant South African junior featherweight title.

After making a successful defence of the South African title he claimed his first world title on 17 November 1996 with a 12-round points victory over Cruz Carbajal for the vacant WBU bantamweight belt.

After making a successful defence of the WBU belt against Gian Maria Petriccioli, he subsequently relinquished it due to weight problems, but then made three successful defences of the SA junior featherweight title.

In possibly one of his best performances on 29 May 1999 at the Carousel gambling resort in Hammanskraal, he won the vacant IBF junior featherweight belt with a 12-round unanimous points decision over John Michael Johnson from the USA.

This outstanding craftsman made five successful defences of the belt before losing it on a sixth-round stoppage to one of the modern ring greats Manny Pacquiao in Las Vegas.

After this setback, the spark was gone and even though he beat one of South Africa’s greatest fighters, Vuyani Bungu, for the vacant WBU featherweight belt, he was not the same fighter.

It was downhill, losing four of his next six fights which included a points loss to Cassius Baloyi for the IBO junior lightweight weight belt.

In his last fight on 24 November 2006 in Mmabatho, Ledwaba lost the WBA Pan African junior lightweight title on a ninth-round technical knockout against Maxwell Awuku.

Lehlo, as he was known, finished with a record of 36 wins, 6 losses and 1 draw, with 23 of his wins coming inside the distance.

Twitter
More in this category: « Italy hold off Belgium to reach Euro 2020 semifinals. Brazil hang on to beat Chile at Copa America after Gabriel Jesus red card. »
back to top