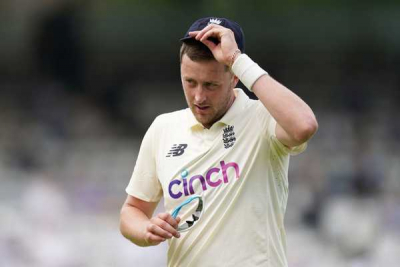 England fast bowler Ollie Robinson is free to play cricket again immediately despite being given an eight-match ban for historical racist and sexist tweets.

Five games of the ban are suspended for two years and three have already been served, after he missed the second Test against New Zealand and two T20 Blast matches for Sussex Sharks.

The 27-year-old's posts from 2012 and 2013 came to light while he was making his England debut in the drawn first Test against the Kiwis in June.

The decision was made by the Cricket Discipline Commission (CDC), an independent panel that adjudicated on the England and Wales Cricket Board's (ECB) rules and also fined Robinson £3,200.

"I fully accept the CDC's decision," said Robinson. "As I have said previously, I am incredibly embarrassed and ashamed about the tweets I posted many years ago and apologise unreservedly for their contents.

"I am deeply sorry for the hurt I caused to anyone who read those tweets and in particular to those people to whom the messages caused offence. This has been the most difficult time in my professional career for both my family and myself.

"Whilst I want to move on, I do want to use my experience to help others in the future through working with [players' body] the PCA."

Following his suspension for the second Test against New Zealand, Robinson took a "short break" and returned to action towards the end of June when he played for Sussex Sharks in a T20 Blast game against Gloucestershire.

Prime Minister Boris Johnson said he was "supportive" of Culture Secretary Oliver Dowden saying the ECB had "gone over the top" in suspending him and should "think again".

However, former England batsman Mark Ramprakash said the Prime Minister's intervention was "unwelcome" and the he was "trying to bear undue influence in this case".