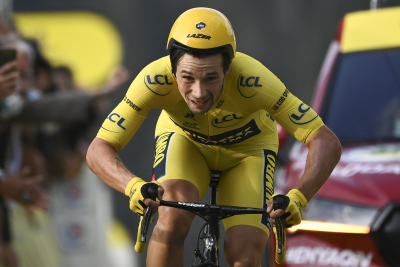 Defending champion Pogacar, 22, rode away from his rivals for the overall victory on the penultimate climb of the Tour's first day in the mountains.

Ion Izagirre was second, 44 seconds behind Teuns, with Michael Woods third and Pogacar fourth, 49 seconds back.

Britain's 2018 winner Geraint Thomas, dropped away early on in the stage.

The Ineos Grenadiers rider, who had a dislocated shoulder popped back in after crashing heavily on stage three, was distanced on the opening uncategorised 5km climb of a bruising 151km race that included three category one climbs.

UAE-Team Emirates rider Pogacar attacked out of a reduced peloton with just over 30km remaining in an extraordinary demonstration of his power, punching his chest in celebration as he crossed the finish line.

Twitter
More in this category: « Will Jordan bags five as New Zealand run up the ton over Tonga. Roger Federer beats Cameron Norrie to reach Wimbledon last 16. »
back to top