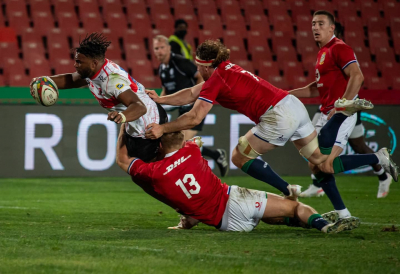 Josh Adams scored four times as the British and Irish Lions began their 2021 tour of South Africa in positive fashion, registering a dominant 56-14 victory over the Sigma Lions in Johannesburg.

Owen Farrell, playing at inside-centre, also notched all eight conversions in the win at Ellis Park, while prop Wyn Jones had a further try ruled out after a TMO review.

This was a far more convincing victory as the selection of club and country combinations brought cohesion to a near-scratch side.

There were, however, also signs of the tourists coming together as a team with Price's try and Adams' first score coming from the back of the line-out and the pages of attack coach Gregor Townsend's playbook.

Defence coach Steve Tandy will also have been pleased by a 10-minute period in the first half where the home side managed to apply sustained pressure inside the 22m but were repelled by committed and coordinated resistance.

Captain Stuart Hogg, left out of the starting line-up for Exeter's Premiership play-off campaign, looked sharp. The full-back claimed the high balls, posed a threat with ball in hand and superbly chased down Sbusiso Sangweni to deny an interception try.

Watson dampened down any doubts over his ability to compete physically against South African physicality with a typically all-action display in the back row, while Elliot Daly looked dangerous running at a tiring defence off the bench.

However, the opposition will get tougher. The Sigma Lions, who lost four out of five matches in the recent Rainbow Cup, look to be the weakest team on the Lions itinerary.

Warren Gatland's side next face the Cell C Sharks on Wednesday, again at Ellis Park in Johannesburg.

Meanwhile a record Wales points win over Canada was overshadowed by Leigh Halfpenny suffering a serious knee injury in the opening minute of his 100th international.

In the first game in front of home fans for 17 months, Wales were shocked by an early try for Canada wing Kainoa Lloyd.