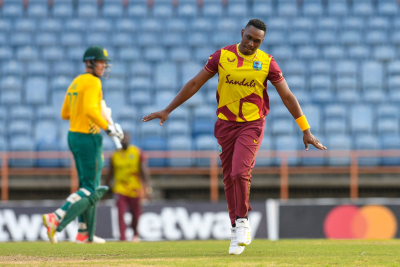 South Africa won their first T20I series since March 2019, and first in six series, by successfully defending the highest total of the five-match series against West Indies in Grenada.

The victory earns coach Mark Boucher and captain Temba Bavuma their first T20I trophy and means South Africa will leave the Caribbean triumphant in both the Test and T20I series.

After choosing to bat first, South Africa posted 168 for 4 thanks largely to the continued excellence of Quinton De Kock and his acceleration in the middle-overs. De Kock brought up his third successive half-century of the series, and saw South Africa through a 49-run Powerplay and most of the period between the 7th and 15th over, in which they scored 89 runs at 9.66. He put together 128 for the second wicket with Aiden Markram, who top scored with 70.

That proved to be the difference against a misfiring West Indian line-up. Tabraiz Shamsi turned in his most economical effort (four overs for 11 runs) while Kagiso Rabada and Wiaan Mulder conceded less than eight runs an over to ensure West Indies could not keep up with the required scoring rate. Notably, South Africa rebalanced their side to ensure they had six, frontline bowling options, including a seam-bowling allrounder, and that strategic change worked well.

South Africa have now won three of the 11 T20I series where the final game has effectively been a decider. Meanwhile, West Indies have won just three of their last 10 T20I series, one against Bangladesh and two against Sri Lanka.

Highest partnership of the series

South Africa tried a different combination in the top three for this match and though Temba Bavuma's promotion to open the batting did not work, Markram made a strong case to be considered the permanent partner to Quinton de Kock. The pair's 128-run stand, the highest of the series for either side, laid the foundation for a total in excess of 180.

Both de Kock and Markram brought up half-centuries; de Kock's was his third in the series and Markram's his fourth in nine T20Is. Impressively, they both scored all around the ground, with Markram's 70-runs an even split of 35 each on the off and on side, with boundaries including his signature cover drive, the cut and aerial shots in the 'v'.

De Kock was stronger square of the wicket, with 28 runs on the off-side and 32 on the leg-side and boundaries mostly on the off-side apart from the slogs off Andre Russell and Akeal Hosein for his two sixes. De Kock's 225 runs are also the most by an individual batter in a bilateral series.

While South Africa would have been pleased to keep things moving through the middle-overs, their concerns around the finishers remain. They scored just 32 runs in the last five overs, and lost Markram and Rassie van der Dussen in that time. David Miller managed his highest score of the series but did not appear entirely confident and faced 14 balls before his only boundary.

Van der Dussen batted lower than usual, at No. 5, and was only needed in the 17th over, which did not give him the time he may have liked to settle. Mulder too didn't look in control with his only boundary coming off a bottom-edge. Overall, South Africa's scoring rate in the last four overs in the series was 6.95, while West Indies struck at 11.43 runs an over in the same period.

Twitter
More in this category: « Argentina beat Ecuador to move into Copa America semifinal against Colombia. Milwaukee Bucks beat Hawks, head to NBA Finals for 1st time since 1974. »
back to top