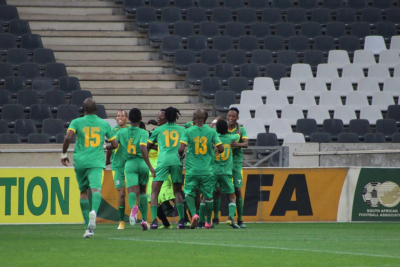 Hungry Lions FC were crowned champions of the 2020/21 ABC Motsepe National play-offs on Saturday after beating Platinum City Rovers 5-4 on penalties in the final of the tournament at Mbombela Stadium.

The match had ended in a stalemate but Hungry Lions edged Platinum City Rovers on penalties to walk away overall winners and pocket a whopping R1 million for their efforts.

Lions beat Rovers 5-4 on penalties in the final.

Both teams went into Saturday’s final having already gained promotion into the National First Division and the final was a tonic of what to expect in the coming season.

Platinum City Rovers walked away with R500 000 for being runners up. Of these amounts, Hungry Lions FC and Platinum City Rovers will respectively plough back R200 000 and R100 000 into the development of youth football projects chosen by the respective clubs in consultation with SAFA and the Motsepe Foundation.

Other awards of the ABC Motsepe National play-offs are as follows:

Top goalscorer of the tournament: Vuyisile Wana from Mangaung Unite

Player of the tournament: Bongi Mkhwanazi of Hungry Lions.

Lions is a football club based in Postmasburg,Northern Cape.

The Northern Cape, which is South Africa’s largest province, has been yearning for a professional club and has had to wait 17 years to have a representative in the paying ranks.

The last club to come from there was Basotho Tigers, which campaigned in the first division in 2004 before it was sold and relocated to North West.