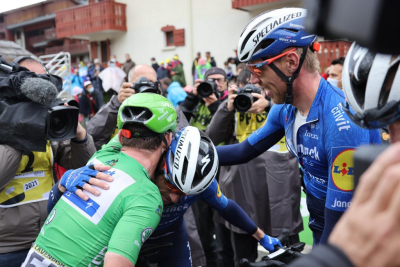 O'Connor broke clear of Colombia's Sergio Higuita 17km from the summit of the final climb to the line in Tignes.

The debutant briefly looked on course to take the yellow jersey, until Pogacar underlined his class with a late attack.

The defending champion now leads O'Connor by two minutes and one second.

Rigoberto Uran is the next closest challenger, five minutes and 18 seconds adrift while Belgian rider, Wout van Aert, who had started the day second overall, dropped out of contention after conceding more than 25 minutes to Pogacar.

Britain's Mark Cavendish retained his lead in the green jersey competition after finishing inside the cut off time, 35 minutes and 49 seconds behind O'Connor.

Nine riders, including Olympic champion Greg van Avermaet and French sprinter Arnuad Demare, failed to finish inside the allotted cut-off time of 37 minutes and 21 seconds behind the stage winner, with several others abandoning the race on the road.

Earlier on Sunday, Primoz Roglic, the 2020 runner-up and one of the pre-race favourites, pulled out of the race, saying it made no "sense to continue", having struggled since a crash on stage three.

However, Britain's Geraint Thomas, who is still recovering from a heavy crash in which he dislocated his shoulder, delivered an encouranging performance to finish 19th after also suggesting that his future participation was in doubt.