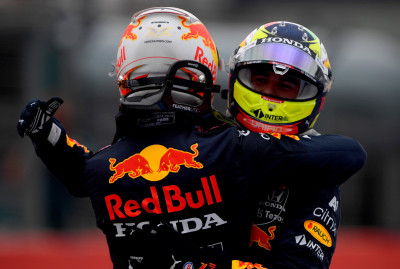 Red Bull's Max Verstappen dominated at his team's own track for the second time in a week to take control of the drivers' championship.

Verstappen's victory in the Austrian Grand Prix was his fourth in five races and moves him into a 32-point lead over title rival Lewis Hamilton.

The Mercedes driver had a troubled race and finished fourth behind team-mate Valtteri Bottas and McLaren's Lando Norris.

And Verstappen's domination raises questions as to the state of Hamilton's hopes of an eighth title this year.

Further down the field, George Russell agonisingly missed out on scoring a point for Williams for the first time when he was passed for 10th place by Alpine's Fernando Alonso with three laps to go after holding the two-time champion at bay for 10 laps.

And there was a bizarre incident on the final lap when Kimi Raikkonen appeared to make a misjudgement and drove his Alfa Romeo into Sebastian Vettel's Aston Martin as they were fighting with Russell, taking both cars out.

Verstappen controlled the race at the front to send the thousands of Dutch fans who had travelled to Styria for the event into paroxysms of joy.

He moved clear in the opening laps as Hamilton challenged Norris for second place in the first part of the race.

It took Hamilton 20 laps before he could find a way past Norris at Turn Four, by which time Verstappen was nearly 10 seconds in front.

The Red Bull driver continued to pull away in the lead and it looked as if Hamilton, who went into the race talking about limiting the damage to his title hopes, would have to settle for a comfortable second.

But the seven-time champion's race took a turn for the worse when he suffered floor damage - from running wide at the final corner, Mercedes suspected - and he began to struggle for both pace and with heavy tyre wear.

Hamilton fell back towards Bottas and Norris. Mercedes initially told the Finn to hold station behind Hamilton, Bottas was then told he was allowed to race his team-mate, and finally the two were ordered to swap places, the Briton letting Bottas by into Turn Three with 20 laps to go.

Norris passed Hamilton two laps later and the Mercedes driver pitted for fresh tyres, having to resign himself to fourth place.

Norris chased Bottas all the way and finished only two seconds behind the Finn in an outstanding drive to the final podium place, despite being given a five-second penalty for pushing Red Bull's Sergio Perez wide as they battled around Turn Four on the first full racing lap after a first-lap safety car.

Ferrari's Carlos Sainz secured fifth place on the final lap as his team tried successfully to calculate what they needed to do to get one of their cars to beat Perez, who was given two five-second penalties for twice forcing Sainz's team-mate Charles Leclerc wide.