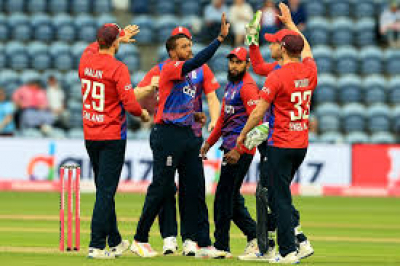 England won their one-day international series against Sri Lanka 2-0 after the third match in Bristol was washed out.

England, who also won the Twenty20 series 3-0, looked well-placed for another victory when they dismissed a sorry Sri Lanka cheaply once more - the tourists all out for 166 in 41.1 overs.

But heavy rain arrived soon after 15:00 BST, during the change of innings, and no further play was possible.

The match was abandoned at 16:15 with puddles forming on the outfield.

In another strong England bowling performance, Tom Curran impressed with 4-35 in his 10 overs.

Curran ripped through Sri Lanka's middle order after Chris Woakes and David Willey had reduced the tourists to 42-4.

England will likely face a far sterner test on Thursday when they play Pakistan in the first of three ODIs. A three-match T20 series follows afterwards.

This has been a miserable tour for Sri Lanka whose only relief is that the rain allowed them to escape before what would almost certainly have been a sixth defeat in six games.

In the first ODI in Chester-le-Street they were 46-3, the second at The Oval 21-4, and here they were four down within nine overs.

Woakes in particular managed to swing the ball throughout but the majority of wickets fell to bad shots rather than good bowling.

Dhananjaya de Silva, who made 91 in the previous game, was one of two batters out on the hook, Oshada Fernando smashed Curran to mid-off to make the score 63-5 and the final wicket came in comedic fashion when Asitha Fernando was run out.

So poor was the opposition, England have learned little from the series but four wickets were a welcome boost for Curran.

The Surrey bowler, whose brother Sam took 5-48 at The Oval, had only taken three wickets in his previous 11 ODIs.

He was helped by wicketkeeper Jonny Bairstow, who took a brilliant diving one-handed catch to dismiss Chamika Karunaratne for Curran's third.

The win extends England lead at the top of the Super League, which acts as qualification for the next 50-over World Cup. Sri Lanka are 11th and in danger of not qualifying for the 2023 showpiece should their results not improve.