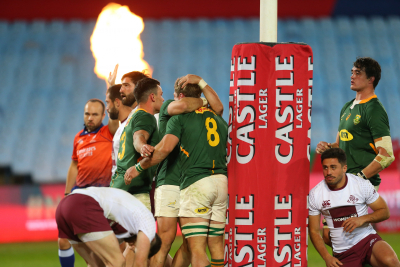 Springboks are isolating for the second time in eight days after a positive coronavirus test in the squad.

The Springboks are due to play Georgia on Friday, with their three-Test series against the British and Irish Lions beginning on 24 July.

The side previously suspended training on 27 June because of three positive tests, but were later cleared to play.

SA Rugby statement said the current isolation was "preventative" and that the squad would have "further testing".

The governing body added that an update would be issued after the situation was reviewed by a medical advisory group.

Jantjies later returned a negative test and was a replacement when the Springboks beat Georgia 40-9 last Friday in Pretoria - their first Test match since winning the 2019 World Cup.

The following day, the British and Irish Lions played their first game on South Africa soil, beating the Sigma Lions 56-14 in Johannesburg.

South Africa is battling a third wave of coronavirus and entered a strict lockdown just as the Lions arrived last week.

Twitter
More in this category: « Pirates confirm new signings for the club ahead of the 2021/22 season. Tunisian Ons Jabeur beats seventh seed Iga Swiatek to reach quarter-finals. »
back to top