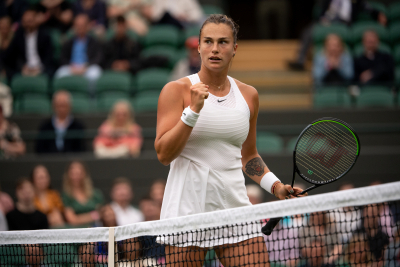 With the victory, Jabeur, 26, becomes the first Arab woman to reach the last eight at the All England Club.

The Tunisian - whose victory at the Birmingham Classic last month made her the first Arab woman to win a WTA title - followed up her straight-set win over five-time champion Venus Williams with a stunning comeback victory over 2017 champion Garbine Muguruza on Friday to continue her best run at Wimbledon.

Her nerves at match point against Muguruza lead to her vomiting at the back of the court before serving out the win - something she later said was related to stomach inflammation, which can be affected by nerves.

However, she faced no such issues on Manic Monday as she fought back to match her best Grand Slam performance, having also reached the quarter-finals at the 2020 Australian Open.

Swiatek responded from 3-1 down in the first set, having been broken in her opening service game, and again from 5-3 behind as she closed out with three successive games to edge ahead in a quality encounter.

World number 24 Jabeur broke impressively at the start of the second set, though, a frustrated Swiatek striking the net with her racquet as she fell 2-0 behind.

The Pole's position deteriorated further from there, as Jabeur surrendered just one game on her way to levelling the match in impressive fashion.

And there was to be no let-up, as the Tunisian produced another sublime set of tennis, sealing her progress in style as she took the final five games without reply to win in one hour 41 minutes.

World number four Sabalenka defeated Rybakina 6-3 4-6 6-3 to set up her meeting with Jabeur and reach her first Grand Slam quarter-final.