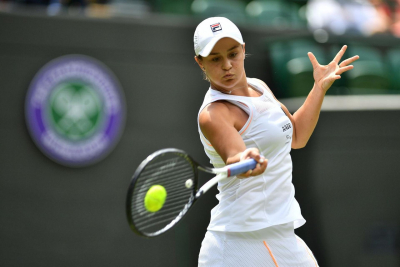 World number one Ashleigh Barty reached the Wimbledon quarter-finals for the first time with a straight-set victory over Barbora Krejcikova.

She will face British wildcard Emma Raducanu or compatriot Ajla Tomljanovic in the last eight.

"Barbora has had an incredible year, she's been one on the toughest players to beat.

"I get my confidence from all the work I put in behind the scenes. This is the fun part.

"I love coming out here and testing myself against the best in the world and there's nowhere else I'd rather be at the moment."

Barty, who won the junior title at Wimbledon 10 years ago, got off to a shaky start against Krejcikova, going a break down in the third game.

She made four double faults before eventually pulling herself level in the eighth game, although not before having to save another break point.

She continued to look far from her best, spurning her first set point before finally capitalising on her second with a break to love as Krejcikova sent a backhand out.

Barty was the first to hold break point in the second set after a Krejcikova double fault, only for it to be saved as the Czech slammed down a serve that could not be returned.

The Australian then saved two break points herself, before finally winning the first break of the set in the sixth game, the following two games then also going against the serve.

She saved break point in what proved to be the final game, needing only one match point as the smashed down the winning serve.

Defeat for Krejcikova ended the Czech's run of 15 wins, dating back to the Italian Open in May.

Meanwhile Italian Matteo Berrettini cruised into the quarter-finals of the men's singles at Wimbledon with a confident straight-set victory over Ilya Ivashka and Novak Djokovic qualified for the Wimbledon 20021 quarter-finals, dominating Cristian Garin in straight sets: final results 6-2 6-4 6-2.