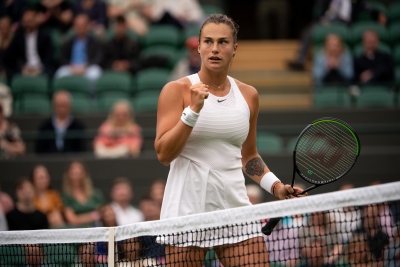 The Belarusian won 6-4 6-3 against Tunisia's Jabeur - the first Arab woman to reach the last eight at the All England Club.

"I'm really happy with this feeling. It's always a tough match against Ons," said Sabalenka.

"She's such a great player, an amazing person."

Eighth seed Karolina Pliskova brushed aside Viktorija Golubic in straight sets to reach the semi-finals of Wimbledon for the first time.

Pliskova ruthlessly clinched a 6-2 6-2 victory over the Swiss in 81 minutes.

The Czech's consistent serve and dominance from the baseline was the difference, and she has yet to drop a set in the tournament.

Pliskova will face second seed Aryna Sabalenka of Belarus or Tunisia's Ons Jabeur in the last four on Thursday.

In their only previous meeting Golubic, ranked 66th in the world, fought back from a set and 4-2 down in a 2016 Fed Cup semi-final to defeat Pliskova.

Faced with an identical situation on Court One, Golubic had three break-point opportunities in a hard-fought seventh game, but had no answer to Pliskova's powerful serve.

Golubic saved three match points a game later, but Pliskova seized her opportunity at the fourth time of asking.

Pliskova's progress to the last four at Wimbledon has signalled a revival of fortunes following a difficult year.

The 29-year-old was knocked out of the French Open in the second round, her defence of the Eastbourne International lasted just one match and she has slipped out of the top 10.

"I am super happy to be through," Pliskova said on court afterwards.

"I feel my game is quite good the last two weeks in practices and matches. We had some good preparation and hopefully we can continue.

"I am going to enjoy this moment because it has never happened for me."

Meanwhile Emma Raducanu says the "whole experience caught up" with her but she is "feeling better" after retiring from her fourth-round Wimbledon match against Ajla Tomljanovic on Monday.

The 18-year-old Briton said she "started to breathe heavily and felt dizzy" after the first set and was advised by medics not to continue.

She described not being able to carry on as "the hardest thing in the world".

"I was not well enough to carry on," Raducanu wrote on Twitter.

Raducanu was trailing 4-6 0-3 to Australia's Tomljanovic when she became unwell, leaving the court before it was announced she would not be returning.

A statement released after her retirement said she had suffered breathing difficulties, but did not go into any further detail.

Radacanu said on Tuesday she began to feel ill after some "super intense rallies" during the first set.

"I wanted to win so badly for you!" she wrote.

He trailed by two sets to one overnight but emerged the fresher of the two.

The 24-year-old will face Swiss sixth seed Federer on Wednesday.

Twitter
More in this category: « Brazil grind out win over Peru to reach Copa America final. Steve Tandy says Lions can 'adapt' to Covid disruption in South Africa. »
back to top