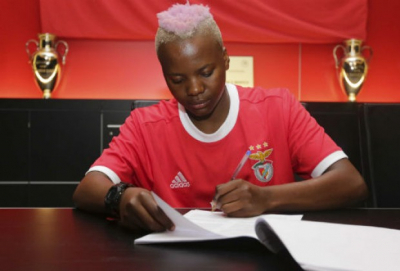 The 25-year-old, who impressed last season while turning out for SD Eibar, has now been unveiled as an Atletico player, with a contract that runs up to 2024.

"Thembi Kgatlana [May 2, 1995, South Africa] is a new Atletico Madrid player [with a contract] until 2024," the club confirmed on their official website.

"The 25-year-old South African is one of the most promising players of South African football, being named best African player in 2018."

The statement continued: "Trained at the University of the Western Cape, in 2018 she traveled to the United States to join the ranks of Houston Dash, a team in which she stayed at for a season until signing for Beijing BG Phoenix and later for Benfica.

"In 2020 she made the leap to the Spanish league by joining the SD Eibar squad, the team from which she comes."

Speaking after sealing the transfer, Kgatlana said: "I am very happy to arrive at Atletico Madrid. As a footballer, you always dream of playing for the best clubs.

Kgatlana signed for SL Benfica from Beijing Phoenix in the summer of 2020, after a season in the Chinese Women's Super League, where she had managed to score nine times.

She had a fantastic season at Eibar but I am super excited and looking forward to the next stage of Thembi’s growth,” said Banyana Banyana coach Desiree Ellis.

"She knows exactly what her next steps are to make her one of the best players around the world,"added Ellis. The Banyana Banyana coach said the good thing with Kgatlana’s latest move was that she would be playing with other African stars.

She has joined a top team and will be playing alongside Rasheedat (Nigeria) and Ajara (Cameroon) which will make for an exciting strike force in trying to bring back the glory to the club whose men’s team has just won the league and hopefully they can follow that success in the next season. We are super proud and may God continue to elevate her," said Ellis.

Twitter
More in this category: « Steve Tandy says Lions can 'adapt' to Covid disruption in South Africa. Cavendish wins 33rd Tour de France stage to move within one of Eddy Merckx’s record. »
back to top