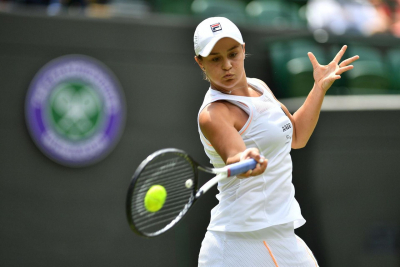 Kerber, the 2018 Wimbledon champion, progressed after a convincing 6-2 6-3 win over Karolina Muchova.

Aryna Sabalenka will take on Karolina Pliskova in Thursday's other semi-final after wins over Ons Jabeur and Viktorija Golubic respectively.

It means that at the last four Grand Slams, including Wimbledon, the 16 semi-final places have been taken by 16 different players.

Barty, the 2019 French Open champion, was no match for compatriot Tomljanovic, cruising through the opening set as she won six games in a row, three of which were to love.

But Tomljanovic appeared stronger in the second set, breaking Barty in the opening game, although she did not hit her second winner until the sixth game when she seemed set to launch a fightback.

She broke Barty again in the seventh but Barty soon stormed home, taking victory on her second match point with an ace - her fifth of the match.

"Ajla is an incredible competitor, she was always going to bring out the very best in me," said Barty.

"This is a dream come true, genuinely. I know you hear that a lot as athletes, but this is my dream and I'm extremely grateful for this opportunity."

Barty will meet Kerber for the fifth time in their semi-final, after the German's dominant win over Czech Muchova.

"It's the ultimate test," said Barty. "Angie has obviously had success here before.

"I love that match-up. I love playing Angie. she knows her way around this court and I hope I can play well."

Kerber, the only previous winner left in the women's draw, wrapped up the first set with ease and had the composure to see off the Muchova's spirited effort in the second.

It marked her 10th consecutive win on grass, having won the Bad Homburg Open in June.

"I know that I have to play my best tennis, and she will push me to that, to give everything out there."

Twitter
More in this category: « Cavendish wins 33rd Tour de France stage to move within one of Eddy Merckx’s record. Four Springboks,management staff, including Jacques Nienaber,test positive for Covid-19. »
back to top