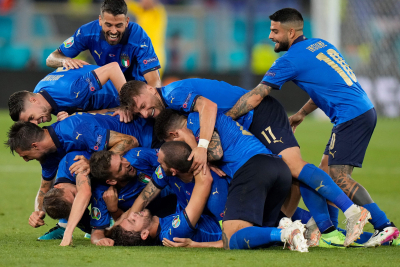 Italy reached the Euro 2020 final after keeping their nerve from the penalty spot to edge Spain 4-2 in a shootout following a compelling 1-1 draw after extra time on Tuesday.

After Alvaro Morata's penalty was saved, Jorginho strolled up to score and set up a final with either England or Denmark in London on Sunday.

Federico Chiesa looked as if he had sent Italy - who are unbeaten in 33 games - to the final in normal time with a delightful curled finish to cap off a quick counter.

But Morata stepped off the bench to slot an equaliser with 10 minutes to go after a one-two with Dani Olmo.

However, the Juventus forward's penalty miss in the shootout proved costly as Spain lost a semi-final for the first time in their history.

Fears about an empty stadium or quiet crowd proved unfounded despite tickets still being on sale during the day, and with fans unable to fly from either country without having to quarantine for too long to watch the game.

Roberto Mancini's Italy side have been arguably the best team in the tournament - and had won their previous 13 games - and deserve their place in the final.

Italy avenged their shootout defeat to Spain in the Euro 2008 quarter-finals and their resounding defeat in the Euro 2012 final, and completed a second straight European Championship victory over the Spaniards after their 2-0 win in the last 16 at Euro 2016.

Wembley's capacity was expanded to 60,000 and although coronavirus restrictions prevented fans from travelling abroad, the two countries' expatriate communities turned out to pack each end behind the goal and generate a scorching atmosphere, which heightened the sense of occasion between two titans of international football.

"It's a pity. We didn't want our tournament to finish today but on Sunday and by winning the title. It was not to be," said Spain midfielder Sergio Busquets after the match.

"This is football. I think the team did well. We had opportunities, controlled the game. We showed a lot of pride. It's a shame. Penalty shootouts are like this.

"Everyone considered Italy favourites but we showed that we were superior to Italy. It's a shame. We didn't deserve to go behind. We can only congratulate Italy and continue on our path."

"Spain were great, they have star players but we fought until the end and we did it," said Italy's Chiesa.

"When Locatelli missed the first penalty, everyone was calm saying we can do it and at the end our group helped us in the moment."

"It was the toughest game I have ever played. I congratulate Spain for what they showed, but once again this Italy showed heart, determination and the ability to push through difficult moments," Bonucci said.

Twitter
More in this category: « On form Akani Simbine destroys African and national records with 9.84 seconds. Argentina beat Colombia in shootout to reach Copa America final. »
back to top