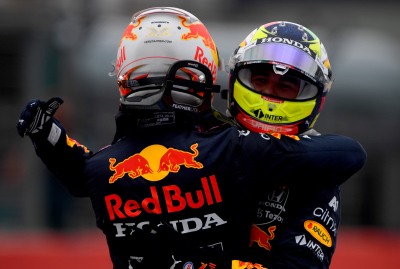 The Australian Grand Prix has been called off for the second year in a row because of the coronavirus pandemic.

The Australian round of the MotoGP world championship, scheduled for 24 October, has also been cancelled.

The Formula 1 event was due to take place from 19-21 November but has been abandoned because of tight border controls in Australia.

"We appreciate the challenge Australia faces with current international travel restrictions and the importance of vaccinations," he added.

The Australian Grand Prix was called off in 2020 and put in place to open the current season on 14 March, only for the date to be moved to November because of border controls.

Its November date race was only to be followed by two more in the F1 season - Saudi Arabia and the season-ending Grand Prix in Abu Dhabi.

But Australian border rules require visitors to quarantine for 14 days, a condition of entry expected to be in place until at least the end of the year.

Organisers of the event ultimately cited "restrictions and logistical challenges relating to the ongoing Covid-19 pandemic," for the cancellation.

Formula 1 chief Stefano Domenicali said a 23-race season would still be possible despite the cancellation.

"While it is disappointing we won't be racing in Australia this season, we are confident we can deliver a 23-race season in 2021 and we have a number of options to take forward," he said.

McLaren's Australian driver Daniel Ricciardo said the news was a "huge disappointment" for drivers but add they "understand the reasons".

"For me personally, I can't wait to have the chance to race at home again, and it'll be even sweeter when we do because it's been so long," Ricciardo added."Fingers crossed things can change for 2022 and we get to see the awesome fans at Albert Park again and put on a good show for them."

The Australian round of the MotoGP world championship, scheduled to take place at Phillip Island, has also now been wiped out for a second successive year.