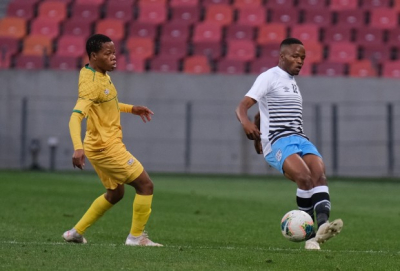 Moroka Swallows striker Kagiso Malinga’s fine second half finish was enough to give Bafana Bafana. a 1-0 victory over Botswana in the opening match of their Cosafa Cup campaign.

Bafana Bafana had been hit by plenty of withdrawals ahead of the tournament, and that was also missing head coach Helman Mkhalele, after he was forced to isolate following a positive Covid-19 test, didn’t have it all their own way against Botswana, who hit the woodwork shortly before Malinga’s strike.

Bafana were coached by Morena Ramoreboli in the absence of Mkhalele, and were captained by AmaZulu goalkeeper Veli Mothwa, also making his Bafana debut, and who showed his enthusiasm by racing all the way up the pitch to celebrate with his teammates when Malinga struck.

Mothwa’s AmaZulu teammate Siyethemba Sithebe was also handed a start, as was TS Galaxy’s Ethan Brooks, who had made an impressive debut in a 3-2 friendly win against Uganda in June.

The decisive goal, in a match of few chances, came in the 67th minute, as Malinga, just 11 minutes after coming on, ran onto a through ball and drilled a volley from a narrow angle past Ezekiel Morake and into the far corner of the net.

The South Africans were able to see out the remaining stages of the second half, but the one was not enough to take the side top of Group A after Eswatini's 3-1 win over Lesotho.

Bafana will switch focus to Thursday's encounter against Eswatini while Botswana will do battle with Lesotho.

Twitter
More in this category: « Australian F1 and MotoGP races called off for 2nd year in row. Chippa United confirm appointment of Gavin Hunt as the Club's new Head Coach. »
back to top