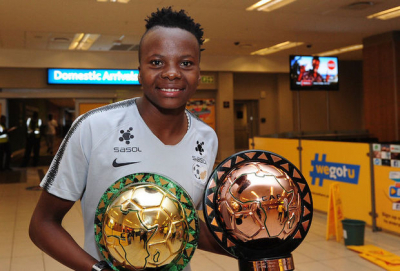 Banyana Banyana striker Thembi Kgatlana poses with her awards at the OR Tambo Airport on her return from Dakar in Senegal where she won the CAF African Women's Player of the Year as well as the African Goal of the Year on January 10 2019.Photo Credit: Ryan Wilkisky.

Exciting news, Strike a Rock : The Story of Thembi Kgatlana by Nikolaos Kirkinis is out now.

This is an important book. Unusually, it focuses on the world of South African women’s football. But more than football, it is the story of Thembi Kgatlana, the girl who rose from the streets of Mohlakeng to become the continent’s best footballer and a global superstar. This is a story about the incredible group of women who carry South African football on their backs. This is also a story about culture, about identity, about family and addiction. This is a soaring tale about hope, about defeating the odds, defying stereotypes and achieving the impossible. This book will thrill and inspire you. If you read one biography this year, let it be this one.

Thembi Kgatlana has had an illustrious career. She donned the country’s colours for the 2016 Summer Olympics, and was the leading goal scorer and bagged Player of the Tournament at the 2018 Africa Women’s Cup of Nations. In 2019 she brought South African soccer fans to their feet when she netted the country’s first- ever goal at the FIFA Women’s World Cup. She has lived in America, playing for Houstan Dash, in China, with the Beijing BG Phoenix, in Portugal, with the SL Benfica and in Spain with the SD Eibar.

When Thembi was 21 she set up the Thembi Kgatlana Foundation in Mohlakeng investing in girls’ soccer.

Nikolaos Kirkinis is the author of the bestselling book The Curse of Teko Modise. He was born and raised in Johannesburg and is passionate about the local game, sports writing and the people who make up this extraordinary world.