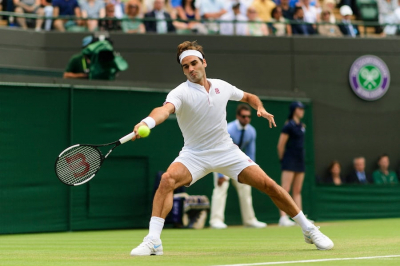 Roger Federer's bid for a ninth Wimbledon title is over after he was stunned in straight sets by Hubert Hurkacz in the quarter-finals.

It is the first time 20-time major champion Federer has lost a set to love at the All England Club.

Hurkacz will play Matteo Berrettini or Felix Auger-Aliassime for a place in Sunday's final.

"It's super special for me," said Hurkacz, only the second Polish man to reach the semi-finals at a Grand Slam.

"Playing here and the special things [Federer] has done here, it's a dream come true."

Hurkacz, who was six when Federer won his first title at SW19, is the first player to win a set to love against the Swiss since Rafael Nadal in the 2008 French Open final.

Federer, at 39 years and 337 days, had been bidding to become the oldest man to reach the Wimbledon semi-finals in the Open era.

But defeat marked his first straight-set loss at Wimbledon in 19 years and left pundits and fans wondering whether this could turn out to be his final appearance at the grass-court Grand Slam.

In gusty conditions on Centre Court, Federer looked far from his best from the very start, forced to save three break points before 24-year-old Hurkacz - the Miami Open champion in April - finally broke his serve in the sixth game.

Federer, who had two knee surgeries in 2020, hit 10 unforced errors in the opening set, his play full of mis-hits, as Hurkacz took first blood in just 28 minutes against his childhood hero.

The Swiss won the first three games of the second set but needed to dig deep to save three break points as Hurkacz, who had won only four Tour-level matches on grass before Wimbledon this year, continued to apply the pressure.

Federer still looked sluggish despite his promising start to the set and Hurkacz broke back in the seventh game, the rest then remaining on serve to set up a tie-break in which a slip on what looked a simple volley at the net at 4-2 down proved costly for Federer.

And then everything unravelled in the third set, Federer only once holding break point as Hurkacz wrapped up the win in one hour 51 minutes on his first match point.

Federer - who made 31 unforced errors compared to Hurkacz's 12 - quickly packed up his belongings and traipsed off court, his head hanging before a final wave to all corners of the applauding arena.