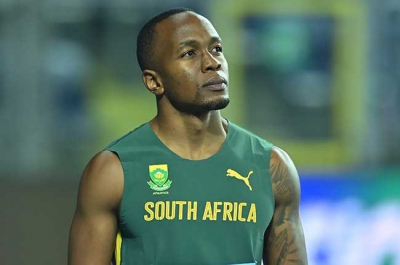 Three days after breaking the African 100m and national record, Akani Simbine will return to action when he enters the blocks against a powerful line-up at the World Athletics Diamond League meeting in Monaco on Friday night.

Simbine, who clocked 9.84 seconds in Hungary on Tuesday, will be among the favourites for the top-flight Diamond League race.

He is up against a field which also features American sprinter Trayvon Bromell, the fastest man in the world this year (9.77) and Canadian star Andre de Grasse. Six of the eight men in the 100m start list have run under 10 seconds this season.

Also on the programme at the same meeting is Ruswahl Samaai, who will turn out in the men's long jump. After finishing fourth at the previous leg of the series in Stockholm last week, the African champion will hope to reach the podium in Monaco.

He faces a line-up which is led by world champion Tajay Gayle of Jamaica and in-form European champion Miltiadis Tentoglou of Greece.

"Every competition is different and anything can happen because you are as good as your last performance," said James Moloi, the President of Athletics South Africa.So, everything they have been all working towards since their last contests will again be tested tomorrow.

"We wish them well and trust that every step they take will reap the desired results they seek. We believe that even though this is part of their build up to the Olympics, they will want to end up on the podium tomorrow."

Meanwhile Central Gauteng Athletics has received news that South African Sports Confederation and Olympics Committee (SASCOC) has revealed the squad that will carry the nations’ flag at the 2021 Olympic Games in Tokyo, Japan from 23 July to 8 August 2021. The athletics team consists of 35 athletes consisting of 30 men and 5 women, who are expected to represent us with great pride at the games.

The athletics team features resilient stars from Central Gauteng Athletics (CGA), the likes of Cheswill Johnson, Jason Van Rooyen, Desmond Mokgobu, Kyle Blignaut, Gerda Steyn, Lythe Pillay and Precious Mashele. CGA is also proud that two of our best coaches who have produced exceptional athletes over the years, Pierre Blignaut and Hendrick Ramaala will be accompanying the team. Ramaala will also go down in history for being part of the games as an athlete in 1996, 2000, 2004, and 2008 and now in 2021 as an athletics team coach.

Precious Mashele became the latest South African athlete to qualify for Tokyo Olympic Games following his remarkable win in the men’s 5000m race in 13:11.65 at Kings Park Athletics Stadium on the last day of Olympic qualification window, 29 June 2021. Mashele who shaved off 2 seconds of the Olympics qualifying standard of 13:13.10 and did not give up chasing his Olympic dream after missing the standard by 4 seconds in Cape Town at the beginning of June.