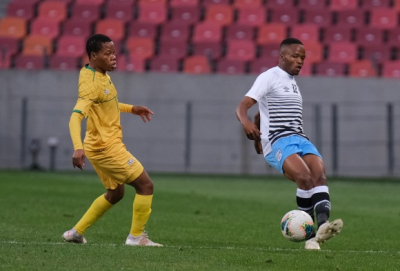 Bafana Bafana have reinforced their squad and technical team for the COSAFA Cup after Covid-19 ruled out two coaches.

Helman Mkhalele and goalkeeper coach Lucky Shiburi have been notable absentees from the opening two games while the squad only had four substitutes in the 1-0 win over eSwatini on Thursday.

Mamelodi Sundowns midfielder Lebo Maboe, Baroka FC defender Lucky Sibiya and Bloemfontein Celtic striker Victor Letsoalo have now been added to bolster the options for the remainder of the tournament.

Bafana who sit at the summit of Group A have also confirmed that Vela Khumalo and Thembalethu Moses have been roped in as replacements for Mkhalele and Shiburi respectively.

South Africa face Lesotho next on Tuesday, 13 Juy, before their final group clash against Zambia the following day.

The victory left SA on six points, meaning they now need just one win from their last two pool phase games against Lesotho and Zambia to qualify for the knockout phase of this regional tournament.

Twitter
More in this category: « Tyson Fury’s promoters reject report that Deontay Wilder trilogy fight will be postponed. Kaizer Chiefs unveil new signings ahead of the new season. »
back to top