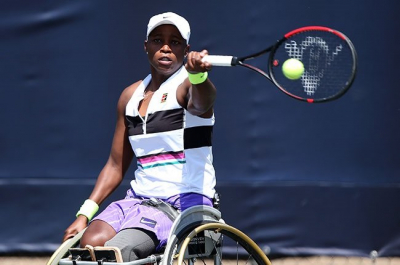 In a big-hitting and big-serving affair, it was the South African world No.5 who created more opportunities, to edge past the Japanese World No.6.

It’s a first Wimbledon final and a first Grand Slam singles final for the Limpopo-born star, who will now face top seed and world No.1, Diede de Groot, from the Netherlands, in Saturday’s final.

The 35-year-old from Seshego became the first African woman to play at Wimbledon in 2018 after she was awarded a wild card and reached the semi-finals.

"I am proud to be blazing the trail for the next generation of female athletes." There’s no limit to what you’re capable of, said Montjane after receiving the wildcard in 2018.

On Friday, Montjane wrote her name in the history books, by becoming the first black South African woman to reach the final at Wimbledon.

"I am just so happy to have made my first ever Grand Slam singles final", commented Montjane, after her match.

Montjane will be in action again on Friday afternoon, when she begins her doubles campaign with her British partner, Lucy Shuker, against top seeds, Diede de Groot and Aniek van Koot.