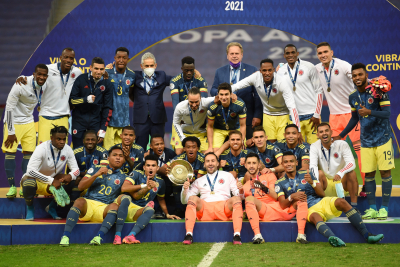 Luis Diaz scored a second-half double, the second an unstoppable 25-metre strike in injury time, to give Colombia a 3-2 win over Peru on Friday and secure them third place in the Copa America.

Yoshimar Yotun had given Peru the lead in the first half only for Juan Cuadrado to equalise with a free-kick shortly after the break.

Diaz then put Colombia in front before a Gianluca Lapadula's 82nd-minute header levelled the match again.

A penalty shootout looked on the cards but Diaz scored in the 94th minute.

"We're happy - it was important to finish by winning," said Cuadrado. "I'm happy with how we reacted [to going behind] and how we went after the result."

Argentina, who beat Colombia on penalties in their semi-final,will play hosts Brazil, who beat Peru 1-0, in the final at 01:00 BST on Sunday.