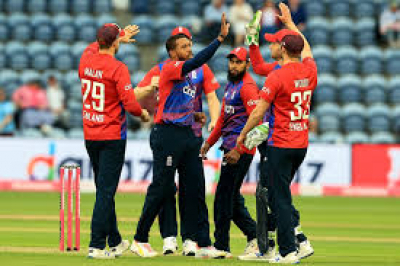 England pulled off another impressive victory over Pakistan by 52 runs in the second one-day international at Lord's to clinch the three-match series with a game to spare.

After rain reduced the contest to 47 overs per side, England recovered from 160-7 to 247 all out in 45.2 overs - the hosts unchanged from an XI that included five debutants in the first ODI after a Covid-19 outbreak.

They then grabbed the initiative of an entertaining game by reducing Pakistan to 86-5 with a fine new-ball spell.

Fast bowler Saqib Mahmood stood out again, dismissing captain Babar Azam lbw for 19 and Mohammad Rizwan caught behind for five, while Lewis Gregory removed opener Imam-ul-Haq with his first ball - the seventh delivery of the innings.

Saud Shakeel kept the tourists in the game with 56 from 77 balls, while Hassan Ali took 22 runs from one Matt Parkinson over to energise the vocal Pakistan supporters.

But Shakeel holed out to deep square-leg off Parkinson and Gregory claimed the final wicket in the following over, Pakistan dismissed for 195 with 36 balls remaining.

All-rounder Gregory, who took 3-44, earlier scored 40 in a crucial eighth-wicket stand of 69 with Brydon Carse.

England had lost 5-42, seamer Hassan ripping through the middle order en route to figures of 5-51, after opener Phil Salt hit an aggressive 60 from 54 balls and James Vince scored 56 from 52.

It resulted in another impressive win for this inexperienced England side, who lead the series 2-0 going into the final match in Edgbaston on Tuesday.

This was also the first cricket match in England to be allowed a capacity crowd since the start of the pandemic, although the attendance was 22,704 - around 75% full.