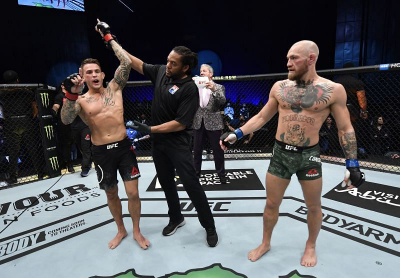 Conor McGregor was sensationally defeated for the second time in two fights after suffering a suspected broken ankle at UFC 264 on Saturday night in Las Vegas.

McGregor, 32, was stopped in the closing seconds of the first round against former interim lightweight champion Dustin Poirier.

Replays showed his ankle appearing to break as he stepped backwards and the fight was stopped by doctors.

"This is not over," McGregor said.

"If I have to take it outside, let's take it outside," he added as he was interviewed while sat on the canvas with his ankle strapped in a protective case, before being taken out of the ring on a stretcher.

It meant the rivalry was perfectly poised heading into their trilogy bout in Las Vegas, and it was Poirier who emerged victorious in unfortunate circumstances.

The action started fast and furious as McGregor switched his tactics from the second fight and opened up with a succession of kicks.

But Poirier, 32, kept his cool and, after fending off McGregor's early attacks, pushed forward with a flurry of punches before eventually forcing the action against the cage.

McGregor attempted to surprise Poirier with a guillotine choke, but the American stayed calm and escaped before punishing McGregor with heavy punches and elbows from top position.

And, when the fight returned to the feet, both men attempted to throw huge shots, with McGregor rolling his ankle when stumbling backward. Poirier then poured on the pressure in search of a finish, but the Irishman was saved by the buzzer.

However, it quickly became apparent that McGregor had suffered a serious injury, with replays appearing to show the Irishman's ankle breaking as he stepped backward.

The event was the first time the UFC had played to a full crowd in its home town since UFC 248 in March 2020, as a capacity crowd packed the 20,000-seat T-Mobile Arena in Las Vegas to watch Poirier and McGregor complete their trilogy.

Twitter
More in this category: « England win by 52 runs at Lord's to clinch series with game to spare. Siya Kolisi among new Springboks players to test positive for Covid-19. »
back to top