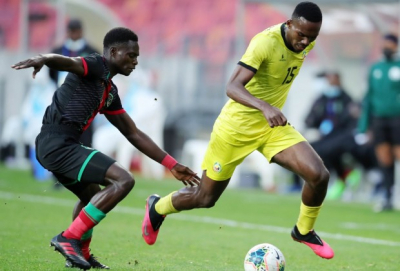 Namibia secured a comfortable 2-0 victory over Zimbabwe in an encounter that took place at Nelson Mandela Bay Stadium.

Zimbabwe, who have won a record six Cosafa Cup titles, were keen to record their maiden victory in this year's tournament, while Namibia were hoping to make it two wins in a row.

The two teams were unable to find the back of the net in the first half which had few chances.

The deadlock was broken 25 minutes into the second half when defender Qadar Amini netted an unfortunate own goal to hand Namibia's Brave Warriors a 1-0 lead.

The Warriors of Zimbabwe then surged forward in numbers as they looked to level matters, but they were left vulnerable at the back.

They were punished by eventual Man of the Match Elmo Kambindu, who hit the back of the net in the 86th minute to seal Nambia's victory over Zimbabwe.

The win took Namibia to the top of the Group B standings, while Zimbabwe remained fourth on the table.

Namibia are scheduled to take on Malawi on Tuesday and Zimbabwe will square off with tournament guests Senegal on the same day.

Meanwhile, Mozambique claimed a well-deserved 2-0 win over a struggling Malawi side in another game which was played at Nelson Mandela Bay Stadium on Sunday afternoon.

Twitter
More in this category: « Djokovic beats Berrettini to join Federer and Nadal as 20 time Grand Slam champion. Italy beat England on penalties to win Euro 2020. »
back to top