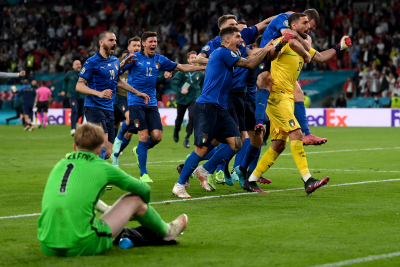 Italy beat England in a penalty shootout to win the European soccer championship on Sunday in London, dashing England’s hopes of winning its first major title since the 1966 World Cup.

The shootout was a dramatic conclusion to a gripping day at Wembley Stadium that saw an early England goal by Luke Shaw, a second-half response from Leonardo Bonucci and then a whirlwind of highs and lows, misses and makes, before Italy prevailed, 3-2.

Gianluigi Donnarumma, Italy’s hulking goalkeeper, pushed aside the final attempt by the England teenager Buyako Saka to clinch the victory, setting off a wild celebration that saw players from each team dissolve into tears.

In their first men's final since 1966 and playing in front of a vocal crowd of around 60,000, England made the dream start when they scored in just the second minute,Luke Shaw volleying in superbly after a quick counter.

But Italy slowly started to gain control of the game and equalised midway through the second half when Leonardo Bonucci stabbed in from close range after a scramble from a corner.

England struggled to find their composure but managed to hold on to take the game to extra time and, after another nervous 30 minutes, penalties were needed to separate the two sides.

And in what was only the second European Championship final to be decided by spot-kicks it was Italy who came out on top as England's incredible run at the tournament fell just short.

Twitter
More in this category: « Namibia move top of Group B with a win over Zimbabwe. Ireland's first ODI against South Africa abandoned. »
back to top