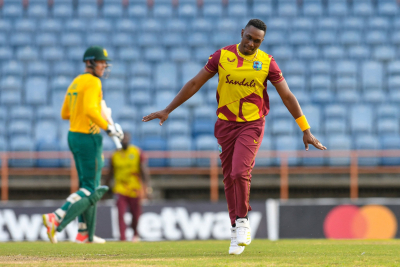 Rain led to the first one-day international between Ireland and South Africa at Malahide on Sunday being abandoned.

After a delayed start, the hosts were put into to bat and made 195 for two in 40.2 overs, with Andrew Balbirnie and William Porterfield scoring 65 and 63 respectively.

The conditions then did not allow for a reply from South Africa to get under way, with play abandoned at around 5.15pm.

Porterfield, who faced 87 deliveries for his 63, his 18th half-century and first since 2019, struck nine boundaries in a watchful opening innings with Paul Stirling (13). Kagiso Rabada (8.2-2-43-2) and Lungi Ngidi (8-0-33-0) failed to strike within the first Power Play with Ireland reaching a very cautious 28 without loss.

Andile Phehlukwayo’s first over went for 12 but struck in his second over, when Stirling decided to take on the medium-pacer, top-edging the ball to David Miller in the covers. Phehlukwayo (7-1-39-1) pulled it back well before rain brought an early end to the innings.

Captain Balbirnie (65) laid a good foundation with a second-wicket stand of 87 off 106 deliveries before Tabraiz Shamsi (8-0-35-1) had Porterfield gloving behind to be caught by Aiden Markram, with the ball bouncing off wicketkeeper Kyle Verreynne’s helmet.

Porterfield’s dismissal did not deter Balbirnie, with the right-handed captain striking six fluid boundaries from 79 balls. Balbirnie chipped Rabada straight to Shamsi at mid-wicket but Harry Tector (25) struck two fours and one juicy six from 28 balls in trying to lift the scoring rate, to try and put more DLS pressure on the visitors before edging Rabada to Verreynne behind the stumps.

Mark Adair was sent in up the order and the right hander struck two sweet maximums to end unbeaten on 16 from eight balls with George Dockrell unbeaten on a single to leave the Irish on 195 for four before rain forced the players from the field.

Both sides took five points in the ICC Cricket World Cup Super League ahead of the second ODI on Tuesday. The third and final ODI takes place on Friday.

Twitter
More in this category: « Italy beat England on penalties to win Euro 2020. Montjane took runner-up spot in Wimbledon final on Sunday. »
back to top