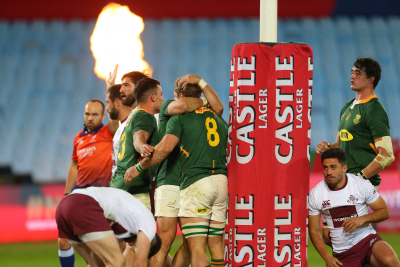 British and Irish Lions head coach Warren Gatland has rejected calls from the Springboks camp for his side to play South Africa A twice in a row.

The Lions face a Test-quality A team on Wednesday and South Africa director of rugby Rassie Erasmus says he will "beg" for a repeat on Saturday.

Gatland's side are due to play the Stormers, but Erasmus says his idea is "safest" given the pandemic.

"We won't be playing them again on Saturday," said Gatland.

South Africa's preparations for the three-Test series against the Lions have been hampered by Covid-19, with over 20 cases recorded in their camp and the whole squad recently self-isolating for seven days.

The Springboks have only been able to play one Test against Georgia, on 2 July, since winning the World Cup in November 2019.

Several of the players that won the tournament in Japan have been named in the A side for Wednesday's fixture as Erasmus' team continue to work towards the first Test on 24 July.

"Our whole camp has tested negative two days in row now and we are in a hard bubble in our hotel" Erasmus said.

"The tourists are negative too. If we [SA Rugby] were in the position to change it, we would just ask Warren and his team for another game against South Africa A at the weekend but it's not that simple.

"I'm going to beg until they can give me valid reason why it's not the safest option."

The three-Test series begins on 24 July.