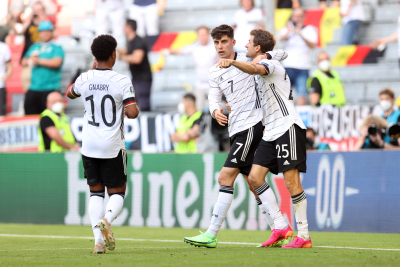 The Bundesliga leading the stats of the EURO 2020

The Bundesliga is well-known as one of Europe’s highest scoring leagues. In keeping with this, its players scored more goals in EURO 2020 than any other league – 29 in total. This shows how the strong cohort from the German top flight brought the Bundesliga’s fast and modern style of play to the European stage.

Bayer Leverkusen’s Patrik Schick ranks the highest in shooting accuracy, with nine of his 16 attempts going on target.

In defence, Borussia Dortmund’s Manuel Akanji was the best player of the tournament. He recovered a total of 46 balls in his five games for Switzerland.

Borussia Mönchengladbach’s Stefan Lainer also displayed true commitment for his team. He won a total of nine tackles in only four games, which is the highest number of any player.

In goal, Borussia Mönchengladbach’s Yann Sommer captured global attention, proving himself as one of the very best EURO 2020 had to offer. Sommer saved a total of 21 shots – more than any other goalkeeper. His heroic performance against France even ensured his team beat the World Champions in a penalty shootout.

Bayer Leverkusen’s Patrik Schick matching Golden Boot winner in number of goals Given the Bundesliga’s attacking style of football, it is no surprise that Patrik Schick of Bayer Leverkusen matched the Golden Boot winner Christiano Ronaldo in number of goals, scoring five goals for the Czech Republic. Although the Portuguese striker beat his Czech counterpart by one assist in the race for the Golden Boot – Schick’s breakdown of numbers shows just how impressive his tournament was.

His 50 yard, inch perfect, second goal was from the half-way line in their opening match. It might be his – and the tournaments – most memorable goal, but he showed his skill in many other situations. A penalty versus Croatia, followed by a right place, right time goal against the Netherlands, and finally the Czech Republic’s final goal of the tournament against Denmark, made for a well-deserved position as one of the top scorers.

Yussuf Poulsen and Thomas Delaney going the distance with Denmark There is no doubt that the emphatic performance of the Denmark national team was one of the highlights of EURO 2020. The team coached by Kasper Hjulmand – who previously had a spell as coach at FSV Mainz 05 – made it all the way to the semi-finals. Following Christian Eriksen’s collapse in the first game, Denmark captured the hearts of football fans everywhere, and finished the tournament in their best position for almost 30 years.

The performance of the Danes was profoundly shaped by two players from the Bundesliga: RB Leipzig’s Yussuf Poulsen and Borussia Dortmund’s Thomas Delaney. Delaney made his move to the Bundesliga in 2017 when he signed with Werder Bremen. From here, he progressed to Dortmund ahead of the Bundesliga's 2018/19 season where he collected his first major trophy – the DFB Cup – this year. Delaney played all six games of EURO 2020, giving his team a 1-0 lead against the Czech Republic in the round of 16.

Leipzig’s Yussuf Poulsen scored two goals in EURO 2020 – crucially, one of them was the Danish team’s first goal against Belgium in the group stages. The player, who joined RB Leipzig when he was only 19 and the club was playing in the German third division, also scored against Russia to ensure his team progressed in the final game of the group stages.

Yann Sommer: The Swiss keeper who defeated the world champions Following several exits at the round of 16 in previous tournaments, the Switzerland team was eager to progress further at EURO 2020. They achieved this against France, one of the tournament favourites and the current world champions. Fundamental to this success was Yann Sommer, the Borussia Mönchengladbach goalkeeper.

With 229 Bundesliga appearances and 64 clean sheets, Sommer’s form at EURO 2020 captured the football world’s attention. In five matches, Yann Sommer made 21 saves – more than any other goalkeeper. He will be remembered most notably for his heroic performance in the penalty shootout against France. Although his French Borussia Mönchengladbach teammate Marcus Thuram delivered, and Borussia Dortmund’s Manuel Akanji, Augsburg’s Ruben Vargas and Wolfsburg’s Admir Mehmedi all scored for Switzerland, Yann Sommer’s save against Kylian Mbappe was the key moment. In the end Switzerland faced defeat in the quarterfinals against Spain, but Yann Sommer truly did a great service to his team.

Twitter
More in this category: « Els celebrates 30th Open appearance at Royal St George's. ASA extends suspension of all 2021 Athletics events due to Covid-19. »
back to top