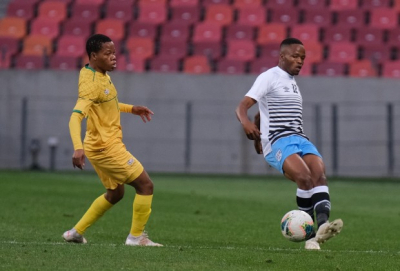 Debutant Victor Letsoalo bagged a hat-trick Bafana Bafana advanced to the Cosafa Cup semi-finals with a 4-0 win over Lesotho at the Nelson Mandela Bay Stadium.

South Africa booked their spot in the semi-finals with a game to spare, which is against Zambia on Wednesday.

Bafana Bafana coach Morena Ramoreboli welcomed back some of the bigger Premier League names among his squad‚ including the Bloemfontein Celtic pairing of Letsoalo and left wingback Sifiso Ngobeni. He even had the depth to have Mamelodi Sundowns attacker Lebohang Maboe come off the bench.

The standard of the opposition was a shade lower‚ and Bafana had some more strength in their line-up. But three matches into the tournament SA also looked a cohesive unit for the first time.

With Rushine de Reuck‚ Thabani Dube and Kaizer Chiefs signing Njabulo Ngcobo forming a formidable back three‚ Ngobeni and right wingback Nyiko Mobbie – who had to fill in on the left in the previous games – had the freedom to roam forward on the overlap.

Lesotho suffered their second 4-0 defeat in succession‚ having lost by that scoreline to Botswana in their previous match.

SA’s last match is against Zambia at the same venue on Wednesday (kickoff 3pm).

The South African Football Association (SAFA) has not paid Bafana Bafana coach Hugo Broos even a cent towards his monthly salary.

This was confirmed by SAFA CEO Tebogo Motlanthe, who said part of the agreement with Broos was that he will earn once he starts the real work.

Broos was appointed as Molefi Ntseki’s successor in May but he had to return to Belgium for his second jab of Covid-19 vaccine.

Twitter
More in this category: « Football fans could watch the CAF Champions League final on TV. Roger Federer pulls out of Tokyo Olympic Games. »
back to top