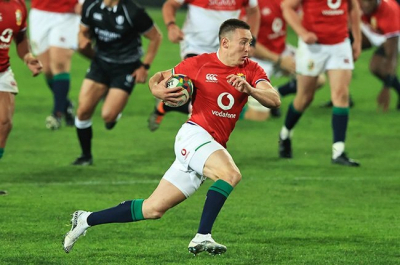 The British and Irish Lions' game against a high-quality South Africa A side on Wednesday will be "pivotal" in determining Test selection, says former tourist Ugo Monye.

The Springboks team includes seven of those who started the side's 2019 World Cup final win against England.

The Lions begin their three-Test series against South Africa on 24 July.

But Monye said Wednesday's supposed warm-up fixture in Cape Town is now "all but a Test match".

"There is so much to be taken by what we will see and some players can play their way into the Test team.

"This is going to be the pivotal game. We always knew it was going to be big but there is talk of a fourth Test match and we are getting it."

Lions captain Conor Murray himself said the game was "almost a fourth Test" after it was announced he would lead the side for the first time.

The scrum-half starts alongside fly-half Dan Biggar and the pair will be tested against World Cup winner Faf de Klerk and Morne Steyn, who won the second Test and the series with the last kick of the game when the Lions toured South Africa in 2009.

Louis Rees-Zammit will also be eager to prove himself on the right wing, with Wales team-mate Josh Adams already eight tries to the good on the left and both will hope not to be outshone by Springbok star Cheslin Kolbe.

The back row is another area in which Gatland is spoilt for choice and Josh Navidi, Tom Curry and Taulupe Faletau will be dealing with the likes of 2019 world player of the year Pieter-Steph du Toit.

The Lions have so far claimed straightforward wins against Japan and provincial sides Sigma Lions and Sharks, but Monye says the step up in opposition "will expose exactly where" the side is.

"You expect them to score 70 points against a provincial side without any of their international players," continued Monye, who toured South Africa with the Lions in 2009.

"This is the first Test and the tour starts on Wednesday, quite simply.

"I just wonder how Warren Gatland plays it, because Wednesday will be so important to win psychologically, but how much of your hand do you show? It will be fascinating."

Players recognise they have an important chance to claim a Test jersey and hooker Ken Owens said he was looking forward to "a step up in intensity".

"For us players it is another opportunity to show what we can do to put a marker down for a place in the Test 23," he continued.