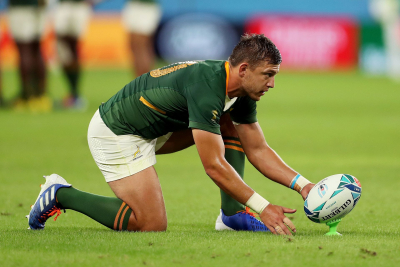 Team SA's men's rugby sevens squad have gone into quarantine after landing in Tokyo ahead of the Olympic Games following a Covid-19 positive case on board their flight.

Sascoc announced in a statement that none of the South Africans returned a positive test, but a passenger not linked to the squad produced a positive return which has led to a knock-on effect.

There are a total of 18 Team SA members - 14 players plus four from management - who have been put in a quarantine facility about 30 minutes from the Olympic village in Tokyo.

"It's an unfortunate situation, but there is no real cause for alarm," said Patience Shikwambana, the Chef De Mission for Team SA at the Tokyo 2020 Olympics.

"We were notified that a passenger aboard the flight tested positive for Covid-19 on arrival in Tokyo. As a compulsory precaution, 18 members have now been put into quarantine. We are confident that a thorough assessment of the circumstances using the appropriate clinical and operational filters, will bring clarity and ultimately resolve the matter. We remain committed to a safe and fair Games for all participants," Shikwambana added.

"We will have more details tomorrow. At this stage it is an unfortunate chain of events that despite exercising the strictest precautions and discipline during this pre-Games the Sevens team have been affected in this way."

The Blitzboks have been drawn in a qualifying group that includes the USA, Kenya and Ireland, with the competition running from 26-31 July.

Twitter
More in this category: « Lions' game against a high-quality South Africa A side 'pivotal' - Ugo Monye. In Tune with Coaching (Live Webinar Series) with Neil Tovey. »
back to top