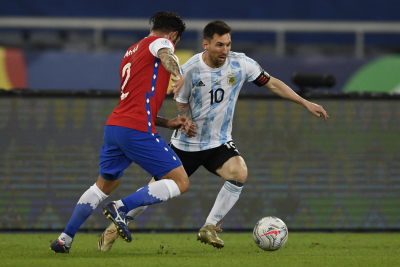 Lionel Messi has agreed to stay at Barcelona on a deal until 2026 that includes reducing his wages to half of his previous salary.

The announcement is dependent on player departures that will allow Barca to fund the Argentina captain's wages.

Messi, 34, was a free agent after his contract expired on 30 June.

Messi had been linked with moves to Paris St-Germain and Manchester City, where he would be reunited with his former boss at Barcelona Pep Guardiola, as well as America's Major League Soccer, which he has previously considered experiencing.

Meanwhile his partnership with Antoine Griezmann in attack will end if Barcelona and Atlético finalise the proposed exchange involving the midfielder Saúl Ñíguez.

Both players are happy with the arrangement but negotiations over their respective price tags must be concluded, with Barcelona saying Griezmann’s value is greater than Saúl’s and wanting money as part of a deal.

Fringe players such as Junior Firpo, Jean-Clair Todibo and Carles Alena have already been sold to free up budget but other big-name departures will also need to take place.