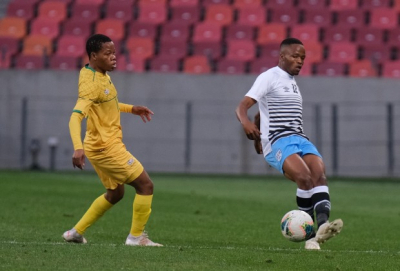 Bafana Bafana interim coach Morena Ramoreboli was satisfied with his side’s 0-0 draw with Zambia on Wednesday that meant they enter the competition unbeaten in the pool stages and without conceding a goal.

The side had already qualified as pool winners before the fixture, and made numerous changes as it came just 24 hours after they had thumped Lesotho 4-0.

"Then we started to play from there. Yes, it was a game that, I believe personally the boys managed it very well, we knew that they will come at us but we had to be very organised, know which moments of the match we had to add numbers in attack and where we need to overload in our defensive blocks. I think we did it very well.

"It's [the aim] to play to their strengths, the type of players you have will tell you what type of system or football you have to play, we have such players allowing us to play in such a way we are playing and they are also enjoying it because it's within their strengths.

"So I think we also tried to do our analysis and make sure that we play to each and every player's strength, that is why you see the likes of [Yusuf] Maart, in his team [Sekhukhune United] is doing very well, coming here we have to give him the very same confidence he's getting from his club, making sure that he enjoys playing and for now honestly speaking he's done very well."

Bafana will take on Mozambique in the semifinals on Friday. The second semi will be between Senegal and Eswatini, with the final to be played on Sunday.

Twitter
More in this category: « British & Irish Lions lose for first time on tour,falling short against South Africa 'A'. Middleton scores 40 points as Milwaukee Bucks level series with Phoenix Suns. »
back to top