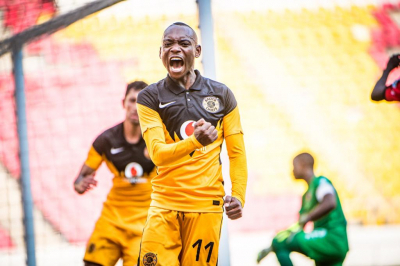 Kaizer Chiefs striker Khama Billiat has vowed that his side will be ready to compete in the CAF Champions League final against Al Ahly.

The clash between the two giants is scheduled to take place next Saturday, July 17 at the Mohamed V Stadium in Morocco.

Mosimane’s men will be going into the game with a lot of expectations as they aim for their 10th Champions League glory, unlike Kaizer Chiefs who will take part in their first-ever final.

However, it won’t be Billiat’s first participation in the final, having won the trophy back in 2016 when Sundowns beat Zamalek 3-1 on aggregate.

Billiat has revealed his side’s preparation plans, while insisting they have to respect Al Ahly if they want to lift their first Champions League title.

"It’s a blessing to be where we are right now, the team has done well in a way of all the difficulties we went through during the [league] season to be able to focus for Champions League,"said Billiat.

The guys really did well to be where we are right now, it’s a great experience and it’s a blessing to be part of the team at the moment, it’s a lifetime experience that any other player would want to be in the [same] situation.

It requires a lot of hard work and to be mentally strong knowing that it’s no longer domestic, we meet the best of Africa and competing for a big trophy you know. I would say give credit to everyone who’s been part of this journey.

"The supporters have been with us through the hard times and right now we’re in the final, we’re 90 minutes plus from the biggest trophy that any other club in Africa would want to have.

We’re still down to earth, maintaining professionalism, we want to do the best the coach wants us to do from training knowing very well we’ll work on one or two things that could make a difference during the game and it’s looking good."

You wouldn’t see this coming but to be part of where we are now, in the final again. I’m in the right place at the right time and surrounded by the right people and right management, I’m at the right club.

"I’ve had this journey before and I know how difficult it is, I know how great the feeling can be at the end, so it’s a movie that has happened before, so I’m glad to be where I am right now and looking forward to going all the way with the team and have great memories with this great club I’m at."

It [the journey] was great, I want to give credit to everyone, it’s memories that we’ll show our kids and we want to perfect it in the final and make sure we stick to the plan the coach is showing us at training and we believe that plan is going to give us the great result."

Pitso Mosimane’s men will be going into the game with a lot of expectations as they aim for their 10th Champions League glory.