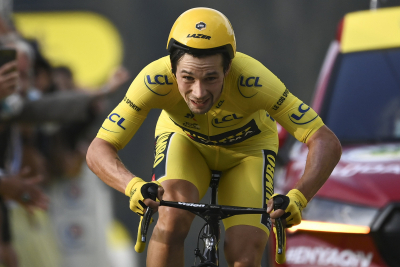 Pogacar accelerated clear on the summit finish on stage 18 at Luz Ardiden to extend his overall lead to five minutes and 45 seconds.

Pogacar is expected to win the time trial on the penultimate stage on Saturday to seal his Tour defence.

The 22-year-old's victory also sees him move to the top of the king of the mountains classification and he is now likely to arrive in Paris on Sunday's processional final stage as the owner of three of the four race jerseys - the yellow, the polka dot and white jersey - for the second consecutive year.

Britain's Mark Cavendish, who wears the green jersey as the leader of the points classification, rolled over the finish line more than 32 minutes after Pogacar, but well inside the cut-off time for the day.

Ineos Grenadiers had tried to use the final climb to set up Carapaz for a late attack.

But it was Pogacar, aided by UAE Team Emirates colleague Rafał Majka who made the first significant move, and then rode clear after chasing down Movistar's Spanish GC hopeful Enric Mas.

"It's unbelievable," said Pogacar. "After yesterday, I felt really good and I'm really happy with the win. It's crazy. There's still three days to go so you never know, but it looks good.

"It was super hard. Already on the [Col du] Tourmalet the pace was such that you just sit in the wheel and forget about everything and then on the last climb, that was the maximum."

Asked if he should be worried about the time trial still to come, Pogacar added: "Why should I be worried? You can lose six minutes in a time trial. It's happened before, but I'm pretty confident."