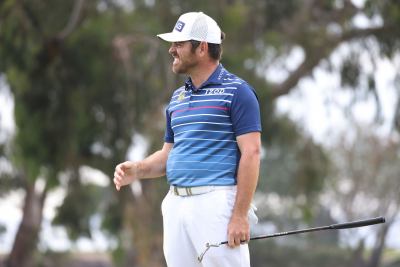 Former champion Louis Oosthuizen leads The Open by one stroke after posting a brilliant bogey-free six under par on the opening day at Royal St George's.

The 2010 winner salvaged par on the 18th to set the early pace as the Kent venue welcomed the return of fans, with up to 32,000 allowed each day.

That puts the South African one clear of another former champion in American Jordan Spieth, the 2017 winner.

Brian Harman also reached five under in warm but windy conditions on the coast.

Six major winners have been crowned since the last staging of The Open two years ago, with the 2020 championship cancelled because of the Covid-19 pandemic.

Shane Lowry won the 148th edition at Portrush in 2019 and the Irishman opened his title defence on Thursday with a one-over 71.

Englishmen Andy Sullivan, Danny Willett, Justin Rose and Tommy Fleetwood are part of a group sitting three off the lead, with American world number one Dustin Johnson one further back at two under.

Northern Ireland's Rory McIlroy was among the late finishers and clawed his way back to level par with a superb birdie putt on the last - his fourth of the day to cancel out four bogeys.

"Mentally it feels a bit better to birdie the last and I'm looking forward to getting back out tomorrow," McIlroy said.

"Tommy [Fleetwood] shot a great 67 which is probably the best of our wave in the afternoon. Benjamin Hebert shot 66 but was out a touch earlier than us.

"When we were warming up it felt like a nice breeze but when we got out there, especially out by the water, it was really windy. Anything around even par today was pretty good."

Spain's world number two Jon Rahm, the short-odds favourite for this major and reigning US Open champion, also birdied 18 to finish at one over but US PGA Championship winner Phil Mickelson made a double bogey to sign for a 10-over-par 80.

Masters champion Hideki Matsuyama is one of several players not competing this week because of Covid-related issues.

Oosthuizen has gone close to adding to his major tally on a number of occasions since his Open victory at St Andrews just over a decade ago, with six runners-up finishes, including at the 2015 Open.

"It gives me confidence going into majors knowing that I'm still competing in them and I've still got chances of winning," said the 38-year-old.

"But once the week starts, I need to get that out of my mind and just focus on every round and every shot."

Oosthuizen also said patience is key to performing well at golf's showpiece events and he opened with seven successive pars before making three birdies through the turn.

Three more followed in the space of four holes on the back nine to send him clear of the pack but Oosthuizen was forced to scramble on the 18th after finding a bunker with his drive, chipping out and then successfully making an up-and-down from 70 yards to stay one clear of Spieth and Harman.

"Out here in windy conditions like this, you need to go on what you feel the whole time," he added after dealing with a breeze that gusted up to 20mph at points.

"It is difficult for the caddie to see what you think you want to do, so it's great that he gives me a lot of confidence in trying to play the shot I want to play."

With 52 of the last 60 Open winners sitting within four shots of the lead after round one, history suggests Oosthuizen has a 30-strong crowd jostling to track him down.