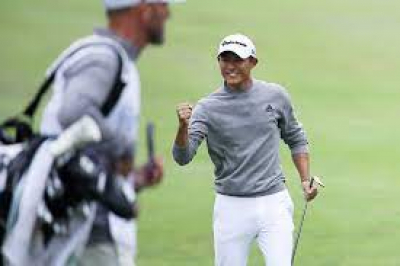 Collin Morikawa stormed through the field to set the clubhouse lead on nine under par at The Open on a gloriously sunny day at Royal St George's.

The American, playing in his first Open, leads those to have finished their second round by three strokes.

Morikawa set off at a scintillating pace and posted seven birdies to reach 10 under after 14 but he bogeyed the 15th as he signed for a six-under 64.

Louis Oosthuizen had the overnight lead at six under and is a late starter.

Jordan Spieth, the 2017 Open champion, who was one behind Oosthuizen overnight, is another of those going out in an afternoon packed with star names.

The top two in the world, Dustin Johnson and Jon Rahm are also out on the course, as are England's Justin Rose, Paul Casey and Lee Westwood and American Bryson DeChambeau.

Morikawa, the 24-year-old who won his first major at the US PGA Championship last year, had a chance to reach 10 under par again on the last but could not convert a birdie putt that would have seen him equal the course record.

"I feel pretty good. Towards the end of the round we stopped hitting fairways and making a few birdies, but overall, it's a very good 64 and I will take it," he told BBC.

"We have to just stick to that game plan for the next couple days. It was a little cold and I kept that sweater on, but it's beautiful now and I expect to see some low scores."

England's Tommy Fleetwood was also among the morning starters and was ticking along steadily before back-to-back bogeys at eight and nine.

The 2019 runner-up pulled those back before dropping another shot on 17, carding a one-over-par 71 that leaves him at two under overall.

Northern Ireland's Rory McIlroy, playing in the marquee group behind Fleetwood, opened with successive bogeys but was back to one under for the day after the 12th.

The 2014 champion then threatened to unravel down the stretch with bogeys on 16 and 17, but a birdie on the last saw him post a second 70 of the week and that may be enough to see him make the cut at level par.