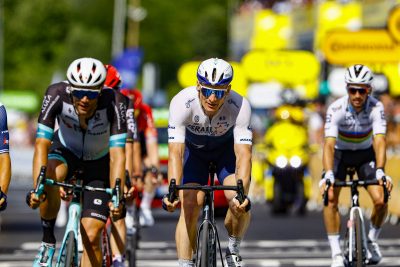 Cavendish had hoped to compete for a 35th stage win, but a breakaway of 20 riders left the peloton well behind.

Cavendish will get another chance in Sunday's final stage, which finishes on the Champs-Elysees in Paris.

Mohoric's second win of the Tour comes after his team's hotel was raided by French police on Wednesday over allegationof doping.

He said after his win: "I was thinking mostly about what happened two days ago. You feel a bit like a criminal. It's a good thing the police are checking - of course they found nothing, because we have nothing to hide.

"But I'm a bit disappointed with the system - it's not a nice thing when police walk into into your room and start going through all your belongings.

"Even if you have nothing to hide it feels a bit weird when they go through your personal things, photos of your family, your phone and your messages."

The largely flat 207km stage into Libourne was expected to result in a sprint finish, with all eyes on Cavendish, who was warmly embraced by Belgian cycling legend Merckx at the start in Mourenx.

However, after a frenetic opening and early crashes involving Geraint Thomas, Rafal Majka, Enric Mas, Sonny Colbrelli and Cavendish, a large breakaway was allowed to escape by a peloton with little appetite to deliver a meaningful chase on the back of several punishing days in the Pyrenees.

And Mohoric delivered a replica of the superb solo attack that carried him to victory on stage seven, riding clear with 26km to go and extending his lead as the chasing group failed to organise themselves.

The peloton rolled home almost 21 minutes later, and Pogacar will defend a lead of five minutes and 45 seconds over Jonas Vingegaard in Saturday's 30.8km individual time trial from Libourne to Saint Emilion.

Twitter
More in this category: « Collin Morikawa storms into lead on day two of Open. Matt Dawson says 'the wheels are off' if Lions lose against Stormers. »
back to top